The large white Sikh gurdwara in Queen’s Park has become a familiar feature of the Bedford skyline and the members of the gurdwara play an important part in the activities of the whole community.

In August 2015, the Guru Nanak Gurdwara was crowded with many members who heard their President speak of how it is an important part of Sikhism to contribute to charities and good causes, and to see him present their donation of £5,000 to The Bedford Hospitals Charity.

This very generous donation is for the Charity’s Challenge CancerAppeal which is raising £750,000 for additional equipment and facilities in the Primrose Cancer Care Unit of Bedford Hospital.

The donation was accepted on behalf of the Charity by Brian Hanling, Press Officer of The Bedford Hospitals Charity. In thanking the members of Guru Nanak Gurdwara, he explained how it is the excellent results and reputation of the staff in the Primrose Unit that make this expansion necessary. The Primrose Unit had been funded largely by the £2.2 million raised by the Charity and the local communities of Bedford and North Bedfordshire some 12 years ago. 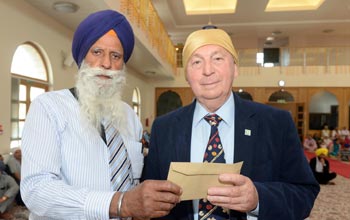 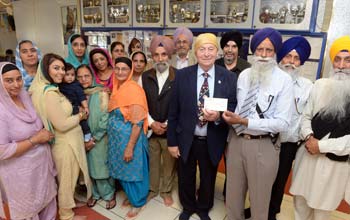