Some of the Past Appeals

Bedford Hospital Charity & Friends / Some of the Past Appeals

The Charity has been raising funds for the hospital since 1988. Some of the projects which the Charity has funded have been small and have not needed specific appeals. On the other hand, some have been large and high-profile. Here are some of the larger and more recent appeals.

The appeal was launched on 26 September 2014 and was called The Challenge Cancer Appeal. It was completed on 31 December 2016.

We spent two thirds of the money improving services at the Primrose Unit:

The remainder of the money was spent on purchasing new specialist equipment for diagnosing gynaecological cancer.

Building work on the final phase was started in May 2016 and the chemotherapy extension was officially opened by the Lord Lieutenant of Bedfordshire, Helen Nellis, on 20 October. Earlier, the Hysteroscopy Sevice had been inaugurated, also funded by the Challenge Cancer appeal. In all, £750,000 had been raised and £750,000 spent on improving cancer services for the people of Bedford. Mission accomplished! 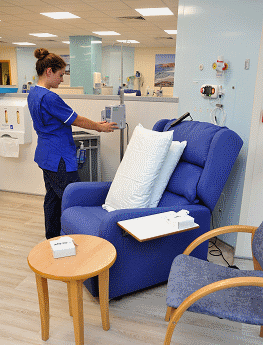 The public’s imagination was captured as never before in the second Primrose Appeal. When the first Primrose Centre at Bedford Hospital was opened in 1994, it was housed in a small, temporary building which would in due course have to be replaced. It did not take long for a replacement facility to became essential. Thus the second Primrose appeal was launched.

The intention was to create a centre that would provide facilities not only for the clinical treatment of cancer, but also for all the support services for patients. Chemotherapy was already given on an outpatient basis, as were transfusions and other treatments and procedures. Radiotherapy, however, would continue to be provided at Addenbrooks Hospital in Cambridge.

In cooperation with Macmillan Cancer Relief, the Charity raised no less than £2.2million in four years and the building opened to the first patients in December 2003. It is still going strong as demand for its services has never been greater. In 2007, the Charity launched the Cancer Screening Appeal. Regular bowel screening using endoscopes has been shown to reduce the risk of dying from bowel cancer by 16%. Endoscopes are long flexible tubes through which pictures can be transmitted to a screen. With endoscopes it is possible to see inside many parts of the body without the patient having to undergo an operation. Many procedures can be carried out through the scopes and newer instruments are smaller and more easily guided which ensures greater patient comfort and makes them more versatile for diagnosis and treatment.

Bedford Hospital NHS Trust was about to start the process of upgrading its existing endoscopy equipment and the Charity offered to make a sizeable contribution so that the very best state of the art equipment could be bought. The Cancer Screening Appeal was launched and the magnificent sum of £400,000 was raised. The new equipment now enables Bedford Hospital to provide a top quality service.

In 2009 the Hospitals Charity launched the Duckling Appeal to raise £200,000 to upgrade parts of the Maternity Department and create a new Midwifery-led Unit within the Cygnet Wing at Bedford Hospital. The unit provides home-like surroundings where mums-to-be will be cared for.

The new rooms provide a safe, comfortable environment for women whose labour starts spontaneously, progresses without complications and without the use of drugs.

The Community responded with the generosity it has shown in the past, and the Duckling Appeal reached its £200,000 target in 2010. The upgraded Maternity Department is now in use and is much appreciated by mothers and staff alike.

The Chemotherapy Preparation Appeal was launched in 2006 to raise funds to provide a new preparation unit to ensure that chemotherapy drugs are available to treat cancer patients locally for at least the next ten years.

Many cancer patients will receive chemotherapy at some time during their treatment involving the use of anti-cancer drugs to destroy cells. Timely, accurate, ultra-clean preparation of the drugs is essential.

The appeal for £335,000 was highly successful and funded the new unit which is now in use.

The Hospitals Charity launched the Gamma Plus Appeal in 2012. Most people are familiar with the variety of ways of creating pictures of the body, such as X-rays, Ultrasound, CT and MRI. A Gamma Camera is another way of creating pictures to help diagnosis and treatment. When combined with a CT scanner, the new Gamma Camera XCT combines the technologies to produce brilliant images. As many as 80% of the patients who need gamma scans will be cancer patients.

The target of £600,000 was reached remarkably quickly and the new Gamma Camera has been installed in Bedford Hospital, putting it among the leaders in this field.