The Bedford Hospitals Charity has recently received a very generous donation of £8,000 and two of £1,000 from within the Sikh community in Bedford, all in support of the Charity’s £750,000 Challenge Cancer appeal.

At a gathering in the Guru Gobind Singh Gurdwara in Kempston on Sunday 11 January 2015, Gurdwara President Gurnam Singh Sucha presented Mr Gordon Beeden, Vice Chairman of The Bedford Hospitals Charity, with a cheque for £8,000 on behalf of all the members of the Gurdwara.

The President spoke of the obligation of Sikhs to help others and to provide financial support to good causes, in this case their donation being in appreciation of the services provided by Bedford Hospital and in support of the current appeal to increase the cancer care facilities at the hospital.

Also on the 11 January, Gurcharan Singh Raj of the Premier Stores and Post Office of London Road, Bedford, presented Mr Beeden with a cheque for £1,000 which had been contributed by his own family and by his customers and other supporters of his Premier Stores. Amongst his customers, Mr & Mrs Graham Knox made an additional personal donation of £100 to the Challenge Cancer appeal in recognition of treatment provided in the Primrose Cancer Care Unit of Bedford Hospital.

On 4 February, Mr Narjit Singh Gill of the Premier store in Gostwick Road, Bedford, presented Mr Gordon Beeden with a cheque for £1,000 for the Charity’s Challenge Cancer Appeal. This generous donation was the result of four weeks of pre-Christmas fundraising by Mr Gill and his family, and the customers and supporters of the store, and their fundraising for charities has now been going on for 26 years. During that time many thousands of pounds have been raised within the store and by events such as sponsored walks and skydiving, and more than 90% of the funds raised have been donated to charities in the Bedford area. 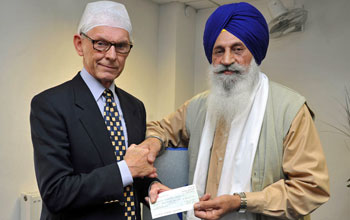 President Gurnam Singh Sucha of Guru Gobind Singh Gurdwara presenting Mr Gordon Beeden with a cheque for £8,000 on behalf of the Gurdwara 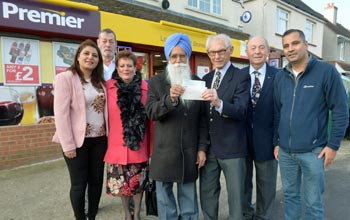 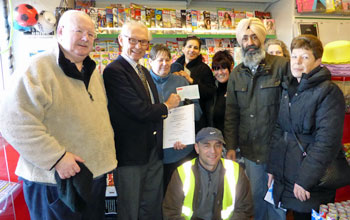